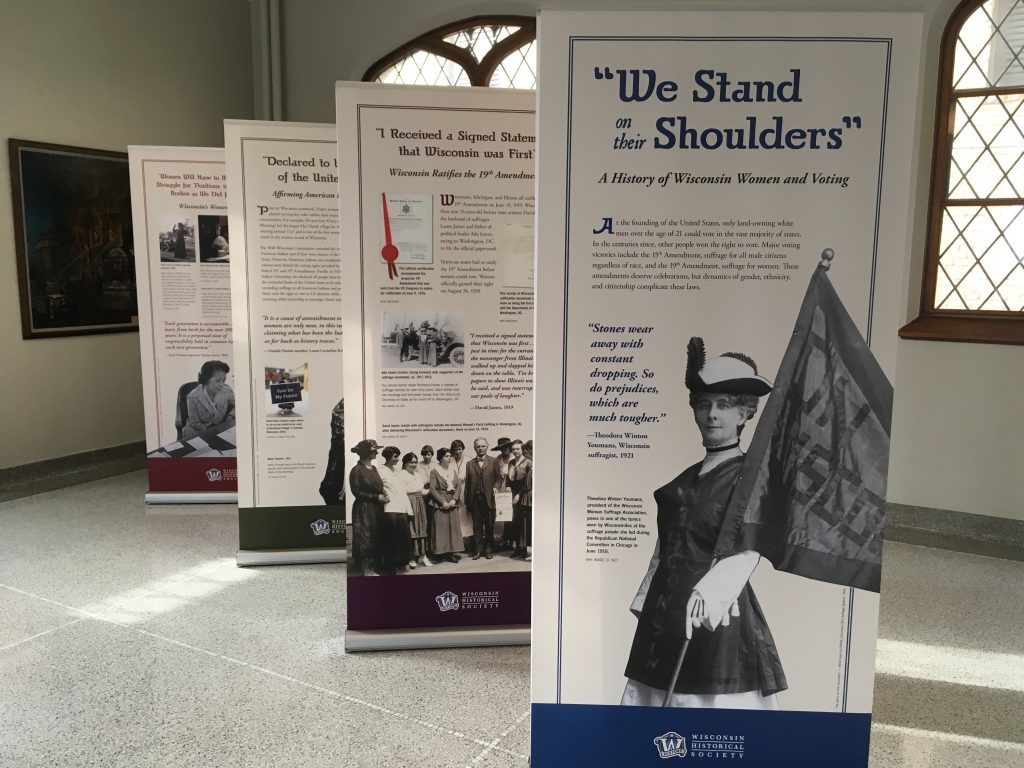 APPLETON, Wis. (December 20, 2019) — The Wisconsin Historical Society, the History Museum at the Castle, and the Fox Valley 19th Amendment Centennial Coalition have partnered on a new traveling display, “We Stand on their Shoulders,” which celebrates the history of Wisconsin women and voting. The banner exhibit will be available to schools, public libraries, historical societies and civic organizations throughout the Fox Cities beginning in January 2020.

“The year 2020, marks one hundred years since some women were granted the right to vote,” said Jenny Kalvaitis, Coordinator of Secondary Education at the Wisconsin Historical Society. “But what a lot of people may not realize is that Wisconsin was the first state to ratify the 19th Amendment and pass a statewide Equal Rights Amendment.”

“We Stand on their Shoulders: A History of Wisconsin Women and Voting” explores women’s suffrage and leadership after the ratification of the 19th Amendment. The 19th Amendment laid the groundwork to enfranchise women but did not extend voting rights to all. A series of additional legislation between 1920 and 1982 broadened opportunities for women of all races to vote. This exhibit explores the landmark legislation, political advancements of women from 1919–1982, and the continuing conversation surrounding voting rights.

In addition to sponsoring the “We Strand on Their Shoulders” traveling display, the Fox Valley 19th Amendment Centennial Coalition is planning a year-long series of nonpartisan celebrations throughout 2020. The Coalition is a collaborative effort of women from area women-run associations, organizations and clubs, including the League of Women Voters of Appleton, Northeast Wisconsin Alumnae Chapter of Delta Sigma Theta Sorority Inc., Women’s Fund for the Fox Valley Region, American Association of University Women–Appleton and Mid-Day Women’s Alliance.

“The members of the Fox Valley 19th Amendment Centennial Coalition are all aligned in our desire to celebrate, advocate for and educate about women’s rights. The traveling display is a great way to help inform more members of the community about the important role Wisconsin played in women’s suffrage,” said Marti Hemwall co-chair of the Fox Valley 19th Amendment Centennial Coalition. For more information on the Coalition’s outreach opportunities, including a speaker’s bureau and educational toolkits, and to find a complete calendar of celebration events, visit hervoicehervoteourvictory.com or facebook.com/hervoicehervoteourvictory.

“We Stand on their Shoulders” will begin touring the Fox Cities in 2020 and be on display at the History Museum at the Castle when it is not booked elsewhere in the community. Along with the traveling display, the Wisconsin Historical Society has provided information for program suggestions, school resources, reading lists and local and national information. Schools, libraries, businesses, or organizations interested in hosting the exhibit can find more information on the History Museum’s website, myhistorymuseum.org.